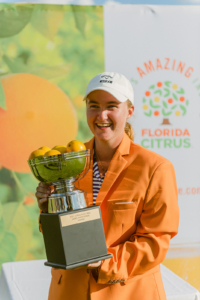 After a four-under par 68 in the third round, Minji Kang held a two-shot lead going into the final round and expanded it to three thanks to a one-under par front nine with back-to-back birdies on Nos. 8 and 9.

Clark, a star on the team at LSU, closed the deficit quickly at the start of the back nine.  She birdied the 11th while Kang bogeyed, then followed with a birdie at the 12th to tie for the lead at one-under par for the tournament.  Kang bogeyed the 17th, the only blemish between the two over the final five holes with Clark closing out the tournament with a simple two-putt on 18 to win the title.

Clark was near the top of the leaderboard all week of the 72-hole event, shooting a one-under par 71 in round one and an even-par 72 in the second round.  Kang rallied in round three with the second best round of the week, shooting a 68 in the third round to take the lead at one-under par going into the final round.

With the win, Clark joins the legendary names in the women’s game that have won the tournament in the past like JoAnne Carner, Christie Kerr, Brittany Lincicome, Morgan Pressel, Stacy Lewis, Charley Hull, and world #1 Nelly Korda.

In the senior division, Terrill Samuel rallied in the final round with a one-over par 73 to overtake defending champion Kim Keyer-Scott by two for her first title in the event.