SEBRING, Fla. — The iconic home of the 12 Hours of Sebring will welcome two of the newest forms of racing on July 16-18 with the inaugural MotoSurf Continental Cup coming to Lake Jackson and the United States debut of MotoSkate at the Sebring Civic Center.

MotoSurf America, the premier league for motorized surfboard racing in the United States, returns to action with its first event in the country since February 2020.  MotoSkate will be hosting its first event in North America, showcasing the new discipline in the skateboarding ranks.

“We are excited to bring MotoSurf back to America and proud to host our first event at an iconic racing city like Sebring,” said Martin Jancalek, MotoSurf Director. “Coupled with our first MotoSkate event in the United States, we expect a brilliant race in Florida to start off our season.”

The two events are expected to bring participants from four different continents, worldwide television exposure, and a live streaming broadcast that will bring the spotlight on downtown Sebring.

“We are happy to host such an exciting event in Sebring,” said Casey Hartt, lead marketing consultant for Visit Sebring. “These two events are an excellent opportunity to have a safe, yet super thrilling time on the water and land, while keeping with our brand as one of the great racing cities in the world.”

In conjunction with Sebring CRA, Downtown Sebring will serve as the backdrop of this event – using the Civic Center as the hub for all the action that weekend on the water and land.  Fans will be able to take in the action of MotoSurf on the pier and beach area while the MotoSkate competition takes place in the parking lot, with a festival atmosphere around it.

The event will be streamed live via YouTube and Facebook, with a 30-minute recap show on CBS Sports Network after the event.

“The Sebring CRA is proud to be a partner in bringing this event to our area, elevating our Downtown with a new use that will highlight our efforts in revitalization,” said Kristie Vazquez, Executive Director of the CRA.  “Bringing the television coverage to incorporate our efforts will give us a showcase to introduce Downtown to the world.”

While MotoSurfing, surfers partake in thrilling rides along with motorized, lightweight surfboards. Surfers competing in MotoSurf are of all ages and from all over the globe, all sharing a love for the water and fast-paced speed.

JetSurf boards have been dominating the MotoSurf tours since its inception in 2013, with boards weighing in at just under 40 pounds.

During this year’s starting event, MotoSurfers will be competing in standard short and long track races. Racers will compete in heats throughout the day, with the winner being the racer who accumulated the most total points during his or her team events.

Riders will partake in qualifying heats on Friday, July 16 in preparation for the weekend races. The top three riders from both the men’s and women’s classes are awarded at the final ceremony on the last day of the tournament.

“It is an honor to help coordinate the first leg of the MotoSurf Continental Cup America this year,” Joel Lamp, Senior Director of Tourism for Airstream Ventures said. “Bringing MotoSurf to Sebring will be a great way to expose the sport to new audiences and hopefully bring more tournaments all over the state.”

MotoSkate is for motorized skateboard racing, bringing a new discipline to the extreme sports world. Much like its aquatic counterpart, MotoSkate races are high-speed events on JetSurf branded skateboards that can run 50 miles and hit speeds of more than 30 miles per hour. 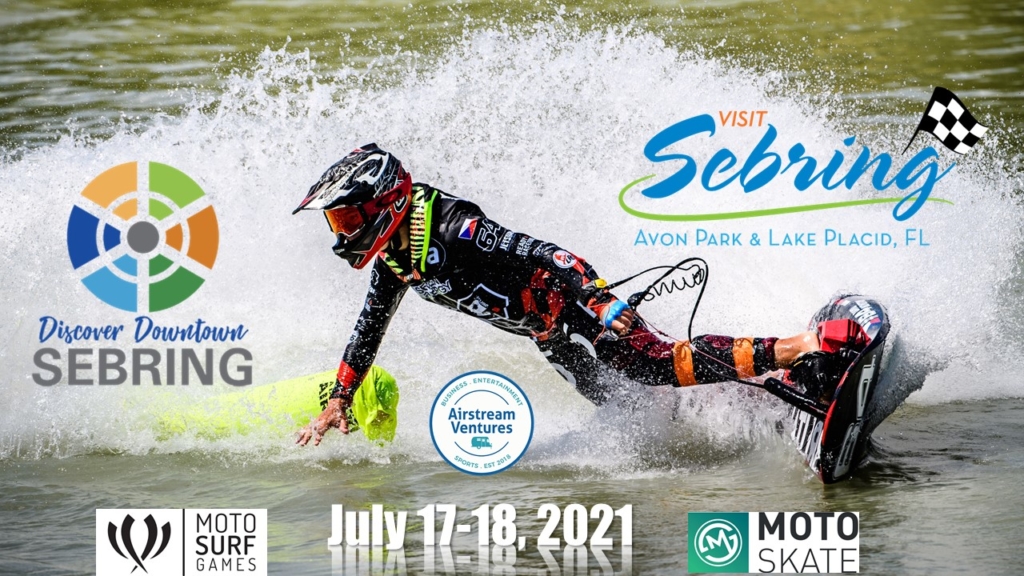